Among the “8 of the best places to swim with sharks” reports BOAT, is Moorea, French Polynesia. The news is shared by Asia Pacific Superyachts MD, Etienne Boutin, taking care of superyachts visiting the island paradise of Tahiti:

“The French Polynesian waters play host to a variety of different species of sharks. The most common are blacktip reef sharks which can be easily identified by the black tips on each fin. Although curious all the sharks inside the lagoons are predominately non-aggressive unless provoked. If you anchor your superyacht in Moorea it is possible to swim with stingrays and sharks in their natural environment without even using a guide.” 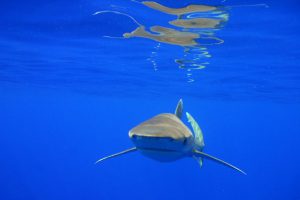 Another Pacific location named as one of the “8 of the best places to swim with sharks” is Fiji’s Beqa Lagoon – specifically, if your passion is Bull Sharks – reports BOAT:

“Drop anchor off Beqa Island and tender to Pacific Harbour to arrange for a guided or unguided dive to the lagoon with Beqa Adventure Divers to swim with Bull Sharks. On the edge of the Beqa Lagoon is a section of protected reef known as the Shark Reef Marine Reserve, now home to a bull shark tagging programme that monitors their behaviour and ecology. The bull sharks share their home with seven other species of shark, including tiger sharks, silvertips and gray reefs, as well as giant groupers and eagle rays.”

Dave Jamieson, heading up Asia Pacific Superyachts Fiji, shares more news of a new private island attraction in Fiji: “Fiji is poised to welcome it’s most luxurious, private island resort in the form of ‘Kokomo’. Being heralded as one of the worlds’ hidden gems, boasting four pristine white sandy beaches, crowned by a pocket of tropical rainforest on the southern summit, the island is encircled by the Great Astrolabe Reef which is home to an abundance of marine life unparalleled in Fiji, known as one of the best dive sites in the world.”

Kokomo Island Fiji Resort is Fiji’s newest and most exclusive private island resort and will officially open in March 2017.